Gildas Berrou was born and raised in Quimper, France, which is situated at the western tip of the region of Brittany, on the Atlantic coast. Brittany is a region known for its sea food, pork products, butter, hard cider, sea salt, and crêpes.

It is in Brittany that the French crêpe originated hundreds of years ago.  It was traditionally made of buckwheat flour and water and cooked on a flat stone in the fire.  Gildas, like most Breton children, was taught by his mother at a young age how to make crêpes on a crêpe griddle (or bilig) with a rake-like utensil called a rozell.

At the age of 16, Gildas began his education and apprenticeship as a bread baker, or ‘boulanger’, working and studying alternatively at the CFA Cuzon trade school and in a variety of bakeries. His minor studies were in ‘viennoiserie’, better known in English as croissant-style dough.

He was accepted into the prestigious trade group called the Compagnons at age 20, where he began his ‘Tour de France’ of baking under the tutelage of some of France’s best bread chefs.  During his years in the Compagnons, he worked for bakers in Paris, Tours, Bordeaux and Lyon.  Through contacts within the Compagnons, he accepted a position as a baker in Tel Aviv for two years from 1995 to 1997.

It was in 1997 that Gildas met his wife, Tara (a native of Northern Michigan), through mutual friends in Paris, and within 6 months he had moved to Chicago.  He worked first at a bread bakery near the University of Chicago before moving north of the Lincoln Park area, taking a job as a croissant baker.

After a few years in Chicago, Gildas and his wife decided to open their own business and started a crêperie in Indian River called The Brittany.  In 2004 the couple decided to close and move to France.

In 2012, Gildas and Tara moved back to Northern Michigan, where they decided to combine their love of making authentic Breton crêpes with their passion for growing organic fruits and vegetables.  You can now find them at the local farmers markets selling crêpes and croissants, as well as, other farm products.

About Chef Gildas & his staff 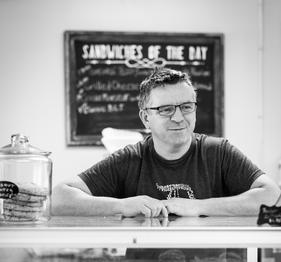